In this article, we will talk about CB radio, how to configure them, and other important features about… Not only the tuning of the radio is important… SWR refers to the standing wave ratio… In these steps, you have seen the procedure to verify the SWR indicator on…

The importance of tuning the CB radio and antenna

The antenna configuration is the key step in the proper functioning of the CB radio since most CB radios do not come with a lot of power, approximately 4 watts. As it has low power, a good antenna configuration is important, because if it is not correctly configured, it will not have an efficient reception and transmission of information. Not having good signal reception and emission, can strain the CB radio mechanisms, which can cause damage to equipment, which is very costly.

You can also configure the CB radio to improve performance, which can even ensure device and signal performance. By configuring the radio correctly, you can also protect your equipment from damage from use or loss of tuning and settings.

What is the SWR?

SWR refers to the standing wave ratio, which is a very important indicator of signal quality. An SWR meter is the device that can measure the quality of the signal throughout the system, that is, in the connection between the antenna, the coaxial cable, the CB radio, and other devices that are connected to the system, and that reaches said signal to the atmosphere. 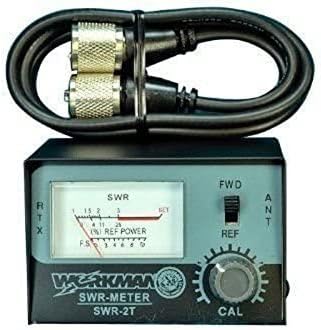 Before the installation of an antenna system, this is an indicator that must be measured to know the quality of the signal, that is, that the transmission power of the signal from the CB radio travels correctly throughout the system. If the antenna system is not installed correctly, the signal strength emitted by the radio, specifically the transceiver, can bounce back and reflect on itself, so that it can cause a rather reduced range of the radio and damage to the radio components.

To perform the SWR test, you must have a short coaxial cable, then using the SWR meter, create a bridge with two ends of the PL259 type, between the antenna and radio system, in order to perform the test. When the meter reads a high reading, it means there are problems with the signal. The lower the meter value, the more efficient the system setup and will work. Based on the SWR readings, you can detect if the problem is with the radio, the coaxial cable, the misconfiguration of the antenna, or is having hardware failures.

How can I get the SWR reading on my radio?

There are CB radios that come with an SWR CAL knob, which allows for the manual reading of the gauge. The procedure is next:

In these steps, you have seen the procedure to verify the SWR indicator on a CB radio that has an SWR CAL knob, but there are radios that do this process automatically. The steps to execute the measurement process in this type of radio is as follows:

There is a switch called SWR on the radios, this must be activated as the first step.

The reading is obtained automatically. This is similar to step 4 of the knob spoke process.

It is imperative to remember that if the SWR indicator reading is not taken care of, then the entire radio system will be compromised, thus incurring equipment loss costs. For this reason, we have begun this article talking about the correct setup of the antenna before active the Radio system.

It is important to note that when the SWR measurement is made, it does not mean that the CB radio is being tuned to the antenna, but rather that it is turning to the location and position of the previously installed antenna. It is a mistake to think that the radio is tuned with the antenna or vice versa because what is really being sought is the correct configuration and positioning of the antenna, which is what will determine the correct operation of the CB equipment.

Importance of a good configuration

CB radios are among the most important for the common citizen who tunes in a station daily, since the entertainment content, good music, and radio programs, make life a little more pleasant. The idea is that every citizen has access to CB radio channels, that is the objective when setting up radio equipment.