Have you ever been in a situation where you just needed to record something right on the spot and have it memorized somewhere, possibly, a phone call or some important part of a meeting? Well, all of that is possible with digital voice recorders.

Today, we will be introducing you to one of the best digital voice recorders that are currently selling on the market- the Sangean DAR-101. We have chosen this one because it really stood out from the crowd, and Sangean has never disappointed us so far!

What is the Sangean DAR-101? The Sangean DAR 101 is one of the best and cheapest Sangean digital voice recorders. With this kind of voice recorder by your side, you will never miss, or forget another radio show, phone call, or even some important part of a meeting.

After testing the Sangean DAR-101 out, we have formatted our opinion of it, and there are more things that we like about it and just a few of those which we do not like as much. Possibly, the only thing which we did not really like about it, is that it cannot record smartphone calls. But, it can record regular phone calls.

To make things easier, let’s just put all of the things that we like about this digital voice recorder on a table:

Since we have never tested out digital voice recorders before, we will try our best to bring you the full image of it, and how it actually works. 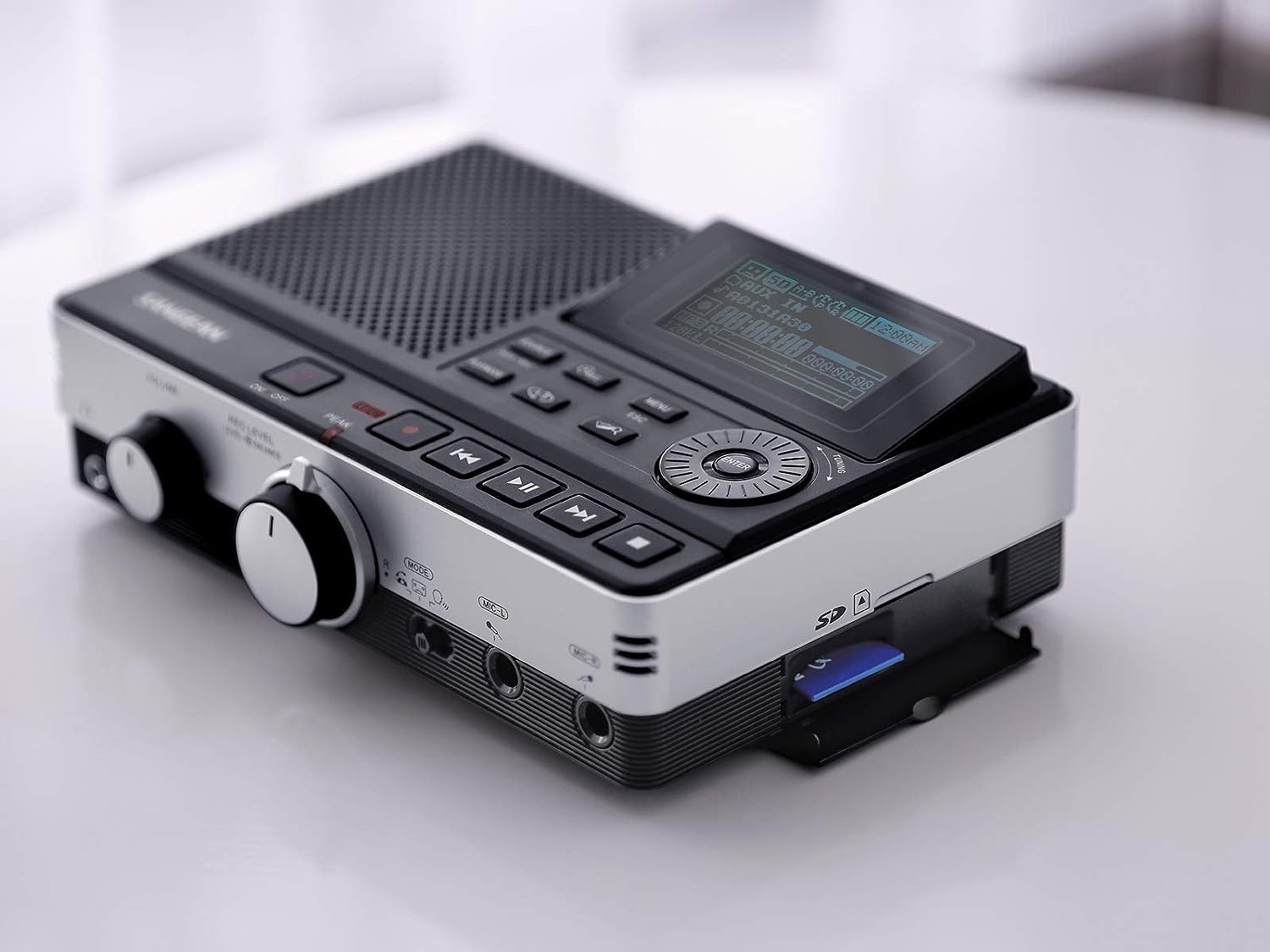 The design and features of this voice recorder

When you first take a look at the pictures of this digital voice recorder, you may think that it is huge and not practical. Well, on the contrary, this device actually weights only one pound and is around eight inches wide. Therefore, this Sangean DAR-101 has a very practical, portable design.

On top of that, the big LCD display has an adjustable backlighting. Everything can be read easily off of that display, which also makes this device really easy to use and to handle. Let’s not forget to mention that the essential buttons for the start of recording (and others) are also there on the display.

With the Sangean DAR 101, you will be able to record notes, as well as your own telephone calls, but also radio shows or some of the meetings. The good thing is that there are actually three speeds for the recording: 64k/128k/192k.

All of the recordings can be saved to the SD memory card, but the card is bought separately and it does not come alongside the digital recorder.

And lastly, one of the best things about this digital voice recorder is that it can convert files into MP3 audio files. This means that you can easily transfer them to your PC and play them right away without the need for conversion.

When talking about this digital voice recorder’s performance we cannot forget to mention that its battery is able to last for a long time without needing another charge. Even the charging is very fast due to the built-in rapid battery charger that this recorder has. The AC adapter comes with it in the box, but, the 4 AA batteries should be bought separately.

We must say that the actual performance of the Sangean DAR-101 is amazing! The sound always comes out really clear and it gives off the feeling like it was recorded with a professional microphone in the studio. But, that is all thanks to the built-in 2 high sensitivity internal microphones that have dual AGC control.

If needed, this device can also be connected to an external stereo microphone since it has that kind of socket built into it.

The user manual and set up

For the customer to be able to use this digital voice recorder with ease, the Sangean brand has prepared a user manual. The user manual consists of all of the important information about the device, and some of the step by step guides in order to learn how to use it. The customer will receive a user manual alongside every device, but there is also a PDF version of it in case you have lost yours! Check it out by clicking here.

The price of this digital voice recorder when we tested it out: $113.77

Is there any device out there that could replace the Sangean DAR-101? Well, we are about to see that!

Should you buy this voice recorder, and is it any good?

There is no doubt that this recorder is definitely one of the best ones affordable on the market. It is also affordable, which only makes it look a lot better. So, you should definitely define the purpose of why would you need a recorder like this one.

If the reason why you need it is to record your classes for example, you might need to find a smaller, pocket size recorder. Yes, this one has a way better microphone, but it would be pretty weird if you would put up a big recorder on your desk at school.

But, if you need this recorder for home usage, for example, then you should definitely think about purchasing it. Not only will it be able to record all of your phone calls, wanted radio shows, and even your meetings, but it will give you the satisfaction of owning a good device like this one.

Is there an alternative for it?

When looking for an alternative, it is important to pay attention to a few factors. We usually tend to focus on the pricing of that other item, and whether or not the prices of the two products are similar. On top of that, you should definitely try to also find a model that will be able to replace the original one in all cases by having similar features to the original one.

So, after searching for a while, we were able to find a cheaper digital voice recorder. The Digital Voice recorder is not only a voice recorder, but it can also be used as a Dictaphone. The amazing thing is that it costs only 33 dollars. To view the full list of features that it has, simply follow the link that we have given you.

Be absolutely sure that this recorder will not disappoint you. We would always choose Sangean devices over any others, and hopefully, you will too by choosing the Sanegan DAR-101. Thanks for joining us today in this process of reviewing the Sangean DAR-101 and testing it.

Does this digital recorder beep during the recording of the conversation?

Yes, when you are recording a telephone conversation for example in the telephone recording mode, you can easily turn the beep on or off. If the beep is turned on, the beeping will occur every sixty seconds.

Am I able to record cellphone calls?

Yes, this digital recorder is able to do such a thing but only if the interface adapter has been attached to it. This adapter is bought separately and it does not come alongside this device in the box.

How much space does it take to record one hour’s worth of tape from the line in Gigabytes?

Well, generally speaking, around 90mbs will be used within an hour. It all depends on the quality of the recording which you have set up before.